SEO & SEA : Study of the e-commerce sector or how to be seen on Google?

Out of 30,000 keywords in the e-commerce sector analysed, nearly 3,000 keywords display paid results, Shopping and/or Ads (1,000 on mobile and 2,000 on computer). Our objective is to understand how to maximise the visibility of an e-commerce site on Google, both on searches with paid ads and on those that are 100% organic. The goal is to deduce a targeted brand and non-brand strategy to be seen on Google.

Note that the computer and mobile SERPs were found to be somewhat identical. Thus, the following analysis is valid on both types of devices.

Out of 3,000 keywords analysed, on desktop and mobile, that displayed either Shopping or Google Ads, only 13 contained both types of ads.

Note that the display of text ads depends on the advertiser's impression rate, which is rarely 100%. It is rather around 50 to 60%, which means that half the time the text ads are not displayed. It is therefore understandable that the number of keywords with both types of ads can vary upwards depending on the time of day at which Google is queried. However, we can still see that this number is low compared to the total number of keywords analysed.

What does this mean? Shopping and ads do not target the same keywords. Indeed, the former are based on a product catalogue, while the latter are based on keywords. It is therefore important to place your ads on both platforms, in order to increase your visibility on a greater number of keywords.

The Google Shopping carousel is always displayed as the first result. So on these keywords, you should appear in the Shopping ads. 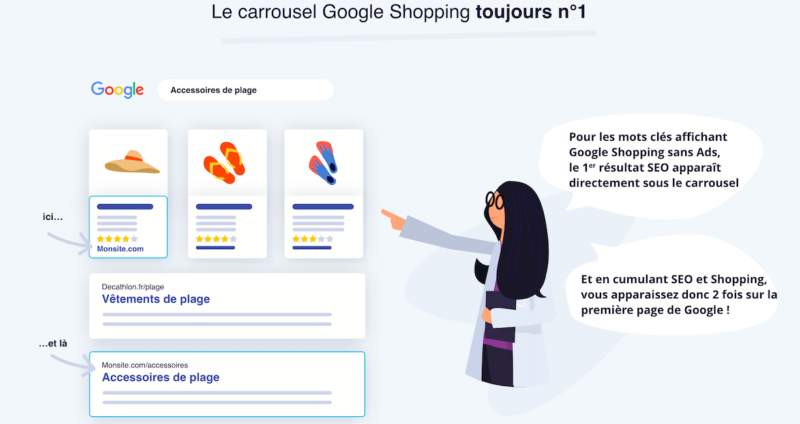 According to our study, the absolute position of the first organic result when the SERP contains a Google Shopping carousel is on average 2, with almost no variation.

The importance of enriched results

Unsurprisingly, the majority of results displayed on Google are organic results. They are presented either in a simple way or as an enriched result, i.e. Google styles the result directly in the SERP. For example, by listing additional questions (people also ask), displaying a map (local pack), etc.

According to our study, in 75% of the cases, the SERPs display an image carousel. Next, we observe the presence of videos, People Also Ask and local pack.

What does this mean? It goes without saying that you should target the first organic results, but also optimise your pages and content for the rich results.

The importance of Google Ads

As mentioned above, Google rarely displays a Google Shopping carousel and Google Ads for the same keyword. This means that you also need to target keywords that display text ads. 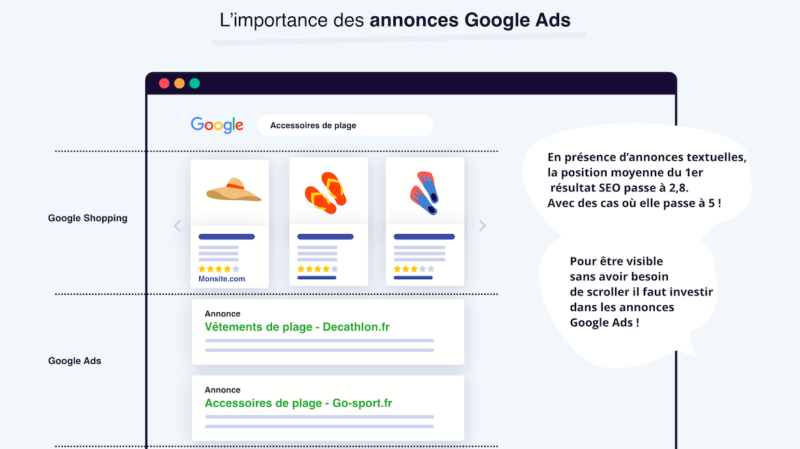 Google reserves the first places for text ads, between one and four. According to our study, the absolute position of the first organic result when the SERP contains Google Ads is on average 2.81, with a high variation.

This means that the first SEO result is sometimes in 5th position. So to appear at the top of the SERP, above the waterline, you need to invest in paid text ads.

On searches with paid ads

What does this mean?

To maximise your chances of being seen multiple times on the most competitive queries, you need to invest as much in Shopping and Ads as in SEO. Paid ads "guarantee" you top positions, while SEO keeps your presence on Google.

And now the full infographic!